Are you ready for cannons, firearms, skulls and other typical pirate items! Pirates Plenty Battle of Gold is a slot adventure that takes place at sea.

Pirates’ Plenty is a three row and five reel slot that can expand and turn into a four row and five reel slot. Maybe, you wonder how this is possible. Well, above the gamefield there is a ship that sails on a map. You have to collect a certain amount of ship’s steering wheel symbols to be able to sail to the Wild Island Row, which is the marking on the map. This is not as complicated as it sounds.

However, the gamefield is transparent. In other words, you can see the beatiful and mighty sea in the background through the game field from the pirateship. It’s also possible to see a glimpse from the inside of the ship. You can see items such as daggers, barrels, lanterns, gold coins, cannons and ship steering wheels.

The lower valued symbols are gilded coins with hearts, clovers, spades and routes on them.  Unfortunately, we don’t find these gilded coins especially attractive. They look a bit shoddy and unappealing. This does not interfere with the quality of the game significantly though.

However, fortunately the higher valued symbols are beatiful. Those are cannons, skulls, guns, captain pirat hats and some strange bottle with a skull on. The most valuable symbol is the skull. There are also a couple of other symbols.

“Collect the map symbols to unlock the Wild Island Row. Once unlocked,
the wild Island remains open for all future spins at the same stake!
One extra row is unlocked and also extra wild symbols. These wild symbols can have multipliers of 2x, 3x, 4x or 5x!

*You will understand this feature once you play, because it’s easy to grasp.

The battle symbols make this game unique. Collect, three of them and Bonus Spins are awarded! Captain Blackbeerd throws Wild Bombs on the reels during Battle Spins and cannonballs are fired. Extra free spins (Battles spins)can be awarded or locked wilds. The wilds are awarded by cannon fire or when Blackbeerd is throwing bombs! Cannonballs can also result in extra free spins or (battle spins).

The mainfeature (the battle spins) is a superb feature. This feature is so unique and amusing that it makes you want to play the game over and over again.

The sticky wilds that you receive and the possibility to get extra battle spins make this feature a blast. The sound of bangs, the great adventourus music, Captain Blackbeerd and the cannonballs create an outstanding gameplay. This feature makes this game worth playing and to a complete Pirate adventure. It’s not just the Battle spins that are great though, even the treasure map is exciting.

Usually, this slot receives top scores from most reviewers. Pirates’ Plenty Battle for Gold is certainly a great slot. The RTP is below 96%, which is low, and the slot can be slightly tiresome in the longrun. The battle spins feature is still great though. 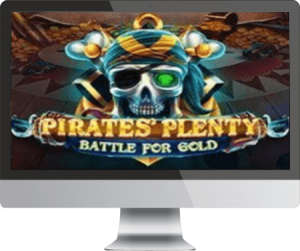