Marching legions slot is about marching troops accompanied with war music! Get ready to serve the Roman empire! Relax Gaming has created an online slot with a supreme cartoonish style that has an unusually high RTP and a max win up to 10,000x your bet!

Have a read to know more about a battlefield with fearless Roman warriors, Roman symbols, a bonus feature and Free Spins!

The gamefield is not a regular playing area, it’s a stone paved battlefield 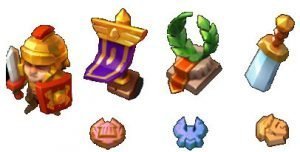 with 243 ways to win and a 4 reel and 4 row layout. A part of the battlefield is inside some ancient Roman building. On the left and on the right sides
are two grand statues visualising Roman soldiers. It is possible to glimpse some green landscape in the backdrop.

The symbols are various Roman icons such as swords and banners. The main symbol is the legionarie. This slot is all about those figures. 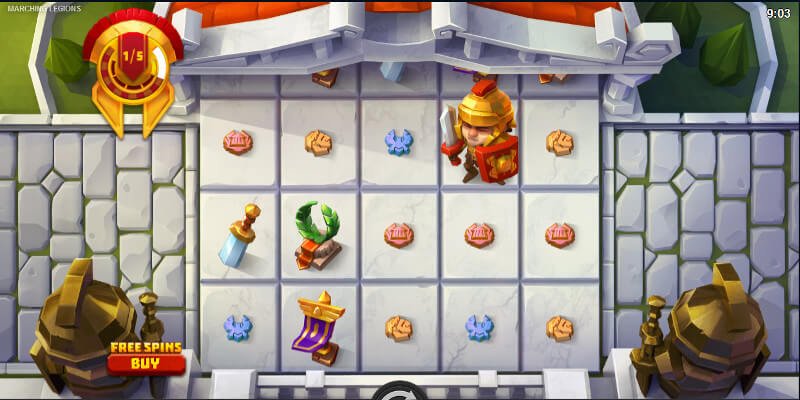 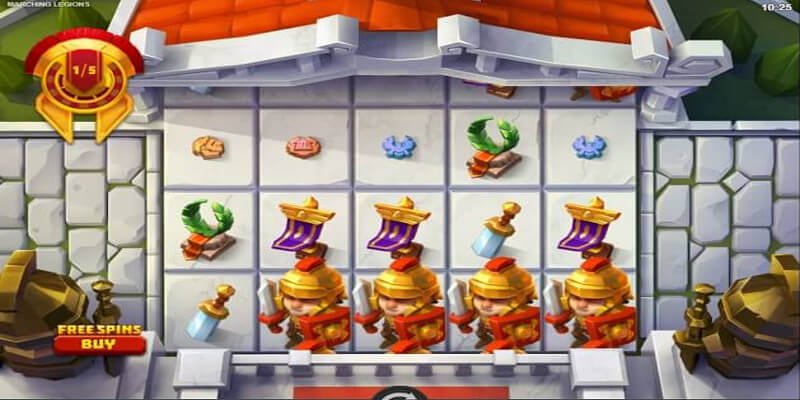 When a full stack of the legionary symbol shows up on the reel, it becomes a Marching Stack (sticky and walking) and triggers a re-spin.” Before each spin, in re-spins, all Marching Stacks of legionaries move one step to the left. 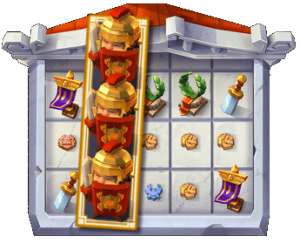 Complete all 5 levels on the collect meter, to activate Free Spins. You need 330 marching Stacks of legionaries collected, to activate the Re-spin.

Buying “Free Spins” can only be done in the base game. Bought Free Spins will cost 120x you regular bet. The theoretical return to player (RTP) for the buy feature is 97.13%.

There is a nudge feature, in which partial stacks of legionary symbols can 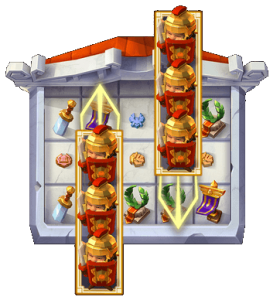 nudge into full stacks. The nudge feature can only be triggered if no Marching Stacks of legionaries are present on the reel area,
and at least two partial stacks have landed. 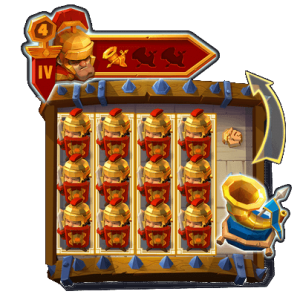 As in re-spins, all Marching Stacks move one step to the left before each spin, and any additional full stacks of legionary symbols landing turn into Marching Stacks.

Each wave continues until no more Marching Stacks are present on the battle field. After a wave has ended the next wave commences if it has been triggered, otherwise Free Spins end. The second wave starts with two Marching Stacks on the two rightmost reels, the third wave begins with three, etc. Any waves after the fifth wave all start with five Marching Stacks covering the entire game area.

It is thrilling to take part of this Roman war slot, even if there is not many ongoing battles.

The marching sound, that accompanies players throughout the entire game is superb and the sound is well synced to the game. Marching Legions is an interesting slot, because it’s a somewhat unique game! The slot is a bit complicated and it can take a while to apprehend what is going on and to understand the meaning of all the meters!

All in all, Marching Legions is an odd and interesting must see and try war slot with fun game play. Worth to notice is that the RTP is extraordinarily high and that you can win up to 10.000x your bet!

Prepare for war and march towards victory! Sign up to one of the casinos on this subpage, and try the slot for real! 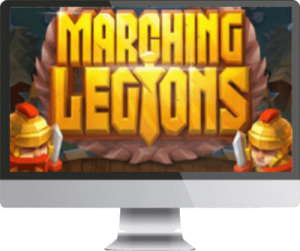 Play the slot for Real here

Valley of the Gods 2 slot