Have you been longing for a Safari? If the answer is yes, then Great Rhino deluxe slot from Pragmatic Play might be something for you. It’s a slot that is crammed with wild African animals.

Unfortunately you wont encounter the complete African Big 5, which consists of the African Lion, Leopard, Elephant, Rhino, and Buffalo. However, you will be able to spot wild animals such as: hyaenas, cheetahs, crocodiles and rhinoceros. The latter is the main character in this onlineslot, likewise in the first version. The new edition which came out two years after the first version has the same medium volatility but bigger rewards.

Get ready for an adventure in the baking Savanna with Super Respin feature, multipliers and free spins.

Great Rhino deluxe is a five reel and three row onlineslot. The inner gamefield is rather modest, which is pleadable since the pleasant symbols are colorful and most of the time cover the reels. You can spot wild animals and the dazzling African Savanna in the backdrop, though. There are also some massai gadgets on the playing field such as spears.

The lower valued symbols are letters  Q, K and A. The higher valued icons are various animal symbols. There are flamingo, hyaena, crocodile, gorilla, cheetah and rhino symbols. The great rhino is the most valuable symbol.

The Rhino gold coin symbol is the wild and the african acacia tree icon is the scatter symbol. 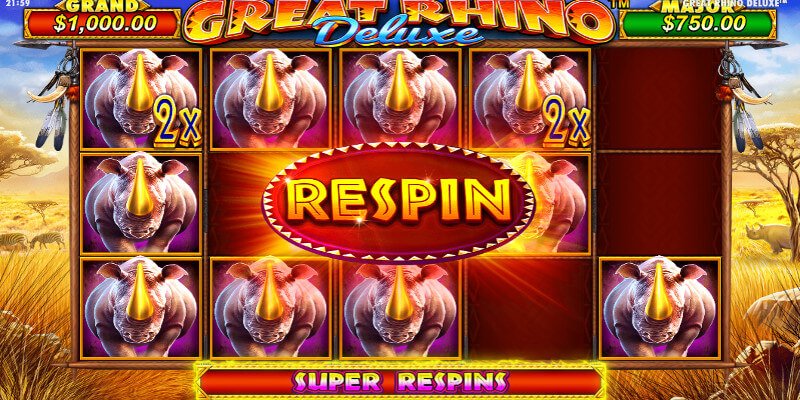 “Hit two or more full stacks of the Rhino symbol anywhere on the reels to trigger the Super respin feature.

winning combinations, after which only full stacks of rhinos remain on the reels.

The round starts with 3 respins, during the round only rhino symbols are spinning. Every time a new rhino hits it remains on the reels and one more respin is awarded. Randomly newly added rhino icons can carry a 2x multiplier which applies on the line win at the end of the round.

When no more respins are left, all win combinations with rhinos are added together and paid.

If during the Super respin feature 15 rhinos hit the feature end immediately and the Grand Jackpot is awarded instead of win lines. The grand jackpot is fixed at 500x total bet.“

The scatter symbol is present on reels 2,3 and 4.

Players are awarded with 10 Free Spins.

During the Free Spins whenever rhino symbol hits it’s collected. At the end of the round on the last spin all collected rhinos come back to the screen in random positions awarding line win as per paytable. Special reels are in play during free spins round.

The new version of this game is an improvent of the anterior edition. The graphics are more captivating and has higher quality. The features in Great Rhino Deluxe slot are amusing. The fixed grand jackpot at 500x total bet is rather measly, the win could definetly be higher. It’s possible to win over 6000x in Great Rhino Deluxe, though.

Register to one of the casinos on this review page and feel the African savanna vibes combined with drumming African sound, in the hunt for golden rhinos
.

A SlotHit can be either a big win or a great slot. SlotHits are always chasing for SlotHits. A slot needs a score of minimum 4.5/5 or 90/100 to get the honor to be called a SlotHit. Great Rhino Deluxe receives a score of 82/100 and is, therefore not a SlotHit! 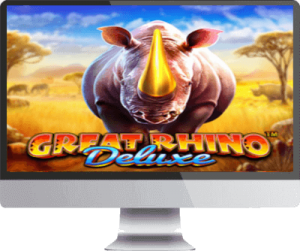