Ist of the Irish Slot

1st of the Irish slot, another Leprechaun game is here! This time from game developer Red Rake. “A Leprechaun is a small Irish man often dressed in green clothes from the Irish folklore.” It’s easy to believe that Leprechaun slot games have become popular, since Leprechauns are droll and have red hair!

That is only a minor cause, the major reason is because: “It’s believed that the Leprechaun reveals the hiding place of treasure if caught” Online slots is about geting treasures, 1st of the Irish slot too! Is this slot just another Leprechaun game or something groundbreaking? Read our 1st of the Irish Luck slot review to find out!

The slot has not the usual 5*3 grid. The game field in this online slot has a 6*5 grid. A cluster pays mechanism, is used in the game where groups of five or more matching items triggers a win. The symbols, then disapear in a cascading reels feature.

The game field is surrounded by a beautiful Irish landscape with lots of green grass, blue sky and flowers. The only thing missing are some livestock animals such as lamb and cows.

However, the symbols are all various Irish gadgets. The lower valued items are the rainbow, clover, pipe, and the hat. The higher valued icons are the Irish beer, the harp, the golden horse shoe and, the pot of gold. The latter is the most valuable symbol.

The Leprechaun is the wild symbol, it replaces all other icons.

There are five meters: the pipe, the beer, the shamrock, the hat and the rainbow.

* It is possible to fill a meter several times, a number will be displayed next to the meter displaying how many times a feature has been activated.

“If several meters are filled, the features will be launched in this order: pipe, beer, shamrock, hat and rainbow. The meters will be reset at the end of each spin.”

“One of the symbols will be released with a multiplier. The number of times 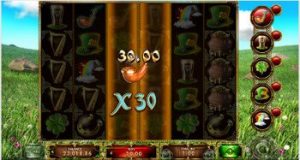 this icon shows up in the reels will become the multiplier. All multipliers will be combined to form a grand multiplier, which will be used to multiply the bet.”

Players will receive A grid of 3×3 beers.

4 sticky wild symbols will appear in the reels.

Each sticky wild symbol has 3 lives. Each time they are involved in a win, 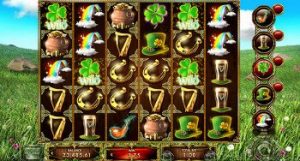 they lose one life. When all 3 lives have been used up, the symbol will disappear.

A hat will appear in a random reel, introducing 8 wild symbols into the reel. 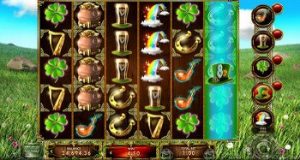 The hat will go up, leaving behind 2 visible wild symbols and another 6 in positions above the reel where they can’t be seen.
These ones will fall in the following cascades, if there are wins.

If you fill the rainbow meter, you’ll receive 12 free spins. 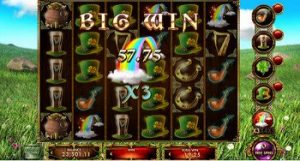 The game is all about collecting various Irish symbols to fill the meters. This is not a groundbreaking feature and it has been seen before in slots such
as Emoji Planet from NetEnt. However, it’s not strange that this feature is used again, because it’s fun!

The falling icons fit to the game and the game phase is fine. If not normal game play suits you, try autoplay, it is fast and smooth. The atmosphere is completely Irish, both the sound and the symbols! The icons are well incorporated in the design and the visuals are pleasant.

Players can fill up to 5 different meters and trigger special features as well as receiving Free Spins. That is respectable and satisfying for most punters who like feature rich slots.

Is this just another Irish themed Leprechaun slot? Maybe, but it’s a rather good one, and definetly above average. For some reason, 1st of the Irish slot hasn’t received top ratings from many reviewers, though, but a few well-grounded review sites have given this slot fine ratings. SlotHits is among those sites who is entertained and delighted by this glad and easy going slot. It’s not a SlotHit but a very amusing game to play occasionally, if the Irish luck is with you! 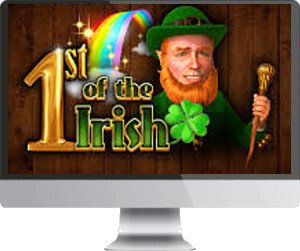 A SlotHit can be either a big win or a great slot. SlotHits are always chasing for slotHits. A slot needs a score of minimum 4.5/5 or 90/100 to get the honor to be called a SlotHit. 1st of the Irish Slot receives a score of 83/100 and is, therefore not a SlotHit!